She is married to Rui Pedro Maneira Câncio, a PE teacher and professional sportsman. He too, throughout his life and career, has managed to conquer many victories, achieve many awards and medals, which have honoured Portuguese sport worldwide.

Sofia started out in the “equestrian” activities a little later than her sisters, as all her spare time was spent taking care of her pets. She loves all animals; in fact, she would bring home any abandoned animal that may have crossed her path, sometimes turning the Centro Equestre into a veritable zoo!

When she earned her first horse (each rider, according to his/her mentality and preparation, is granted a horse so s/he may train it until s/he achieves the desired results), Sofia managed to impress everyone with her care, love of animals and patience. The experience she has acquired over the years spent with her family and teaching new pupils has created true miracles. She makes horses become sweet tempered and turns the bad-mannered ones into more tolerant animals. 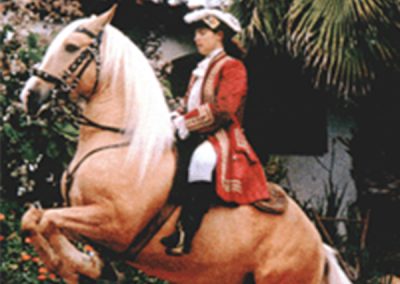 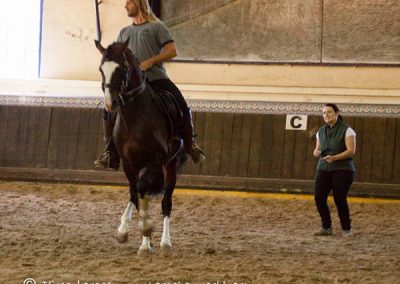 At the age of 15 she started to gather all the necessary elements and conduct studies to build a kennel with a permanent clinic and boarding. This was, at the time, truly unique in her area.

She hired an architect and her dream has been approved by local council. She also owns the land on which it will be built. Now the hardest part is yet to come – to kick-start a project that despite being small in size is big in expenses and with little support.

As an international rider, Sofia made her debut in 1987at Equitana in Essen , Germany, where she was the main star carrying the Portuguese Flag riding Sultão and performing all the High school Movements before a crowd of thousands, as well as TV cameras.

From 1991 onwards she became a fixture of the Centro Equestre’s shows both at national and international level. She mainly rode her favourite horse, “EPÁ”, which she taught from when he was a colt, teaching him the most difficult exercises, from the Airs above the Ground up to the gallop work whereby the horse was an expert on performing the flying changes…

While alive, he was an easy horse to handle, sweet, able and happy. Unfortunately, he died at the tender age of eight with great potential still to give, a victim of unforgiving colic…

From 2001 – 2002, she was part of the Royal Horse Gala’s team of riders and she replaced her sisters, who were in Thailand setting up the equestrian and tourist centre “HorseShoepoint”, thus becoming the lead sole act.

During the 2004/2005 “Apassionata II “ tour, she replaced her sister Luísa whenever necessary, such as in Münster, Innsbruck, Chemnitz, and recently in Kassel, while Luísa was training for the World Cup Finals in Las Vegas.

Her international path has not been quite as complete as that of Luísa and Filipa because someone has to stay behind…. and Sofia is the one left in charge of the Centro Equestre’s classes and shows. She is always the one who is “responsible” for what is going on back home.

The riding classes and internships are under her guidance.

Her days are completely booked with dozens of pupils. Without the creation of such a “school” it would be hard to find and prepare new pupils, the ones who will take the Portuguese riding art into the future.

Her daughters Inês and Beatriz will follow in her footsteps!

At the age of three, Inês made her debut in a show at the Golega Horse Fair and since then she has been a constant presence at this Fair as well as in many other shows for which she is requested.