From an early age, horses have been a dominant feature in Filipa Valença´s life. The eldest of a Master Horse rider, she learnt the art when she was almost still a toddler, under the influence of her Father, her Godfather – Fernando Ralão – and Master Emílio Mota.

Following the ‘hard’ years of the Carnation revolution in Portugal, the family headed to the Canary Islands where Filipa, alongside her Father, rode the horses of the ‘Tauro Country Club’ show. 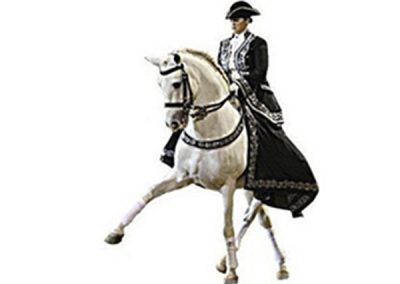 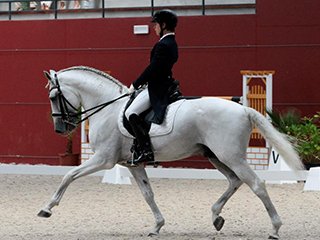 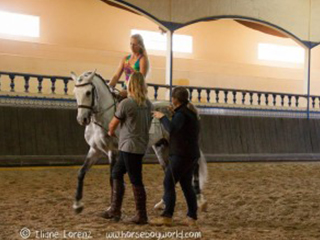 In 1987 Filipa had her first international performance in what was considered one of the most important equestrian events of the world at that moment, Equitana in Essen, Germany. During the break of the World Championship she presented her Horse, ‘Viçoso’. Both the audience and the judges were awed by the magnificence of the Lusitano and its young rider.

However, Filipa also dedicated herself to the sporting side of Horse riding. She was the main founder of Horse-Ball in Portugal – an activity which had, until then, been unknown to the general public in her country. Owing to her commitment, the Portuguese Horse-Ball Association was created and recognized by the Portuguese Equestrian Federation. She participated in several championships and was several times National Champion. Yet, at this time, mixed teams were not allowed and her participation abroad became limited. The crunch came when a friend, and colleague, met his death during a Horse-ball match. She then cancelled all events, claiming that conditions were not met for this sport, and from then onwards for her, Horse-Ball was over.

Looking abroad, Filipa was responsible for the creation of a novel horse riding centre in Thailand, featuring, among other races, the Lusitano Horse. In August 2001, in the presence of several Portuguese authorities, this centre was officially opened. It is a huge success story.

Meanwhile, from 1996 until 2002, Filipa was part of the Portuguese team featured in the ‘Royal Horse Gala’. During these years, there were hundreds of shows in 62 cities of 10 different countries.

In line with these shows and in representing her country abroad, she is currently part of the ‘Apassionata’ organization – a show that takes her to the main equestrian stages in Europe.

Alongside these activities, Filipa is her Father’s pillar in managing the Centro Equestre da Leziria Grande. She possesses a great sense of responsibility, helped, no doubt, by her immediate family and her two little ‘treasures’ – her sons Luís Filipe and João Filipe.